Another treasure in the Istanbul Archaeology Museum is the Siloam Inscription. Here is its history:

The Old Testament records the Assyrian threat to Judah in the days of good King Hezekiah (715-686 B.C.).  The Assyrians had already taken much of Judah’s territory (the Sennacherib Prism states Assyrian had taken forty-six fortified cities) and were advancing upon Jerusalem (701 B.C).  But Hezekiah had made wise preparation in anticipation of this fearsome foe. Hezekiah had two teams of tunnelers working from opposite directions; one starting from outside the city wall at the Gihon Spring, the other starting from inside the city, chiseling through 1750 feet of solid rock.  As a result, the “gently flowing waters of Shiloah” (Isa. 8:6) were channeled inside the city (2 Kings 20:20-21; 2 Chron. 32:30).

We hope the following photos will help illustrate the text for you:

“This is the story of the boring through. While [the tunnelers lifted] the pick-axe each toward his fellow and while 3 cubits [remained yet] to be bored [through, there was heard] the voice of a man calling his fellow—for there was a split [or overlap] in the rock on the right hand and on [the left hand]. When the tunnel was driven through, the tunnelers hewed the rock, each man toward his fellow, pick-axe against pick-axe. And the water flowed from the spring toward the reservoir for 1200 cubits. The height of the rock above the head of the tunnelers was a hundred cubits.”

Of course, more was involved than Hezekiah’s engineering feat of constructing the tunnel.  There was divine intervention as God delivered Jerusalem from the Assyrians: 2 Kings 19:35 records, “And it came to pass on a certain night that the angel of the LORD went out, and killed in the camp of the Assyrians one hundred and eighty-five thousand; and when people arose early in the morning, there were the corpses — all dead.”

This photo shows the Gihon Spring, the source of the water supply. 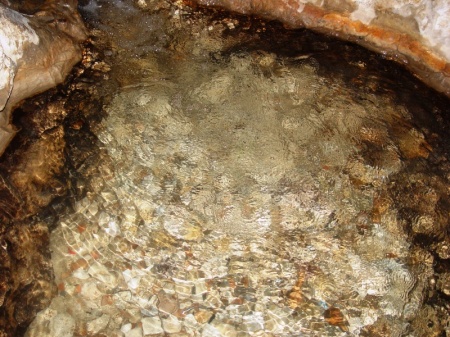 The water still flows inside the tunnel. 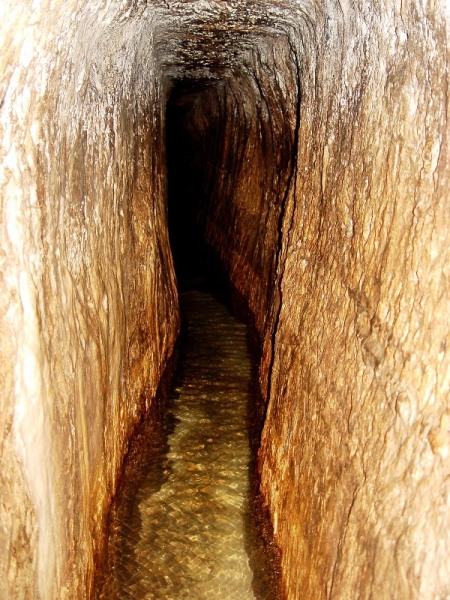 It’s a tight squeeze in places:

Finally, here is a photo of the location where the Siloam Inscription was chiselled out:

The Shadow on the Sundial

King Hezekiah was one of Judah’s best kings. He faithfully led the nation in very difficult times.  Then he became sick and was near death. God sent the prophet Isaiah to Hezekiah with the message, “Set your house in order, for you shall die and not live” (Isa. 38:1).  Hezekiah fervently prayed to the Lord, his prayer was heard, and the Lord promised to add 15 years to his life. As a sign to confirm this promise, God said, “Behold, I will bring the shadow on the sundial, which has gone down with the sun on the sundial of Ahaz, ten degrees backward” (Isa. 38:7,8, NKJV).

Some translations render the Hebrew term maalah as “stairway” (see NAS, CSB).  The NET Bible notes, “These steps probably functioned as a type of sundial.”

Whether the term means “steps” or “sundial,” certainly what is under consideration is a means of telling time by the moving shadow cast by the sun.  The miraculous sign was that the shadow would return, it would go backward by 10 “steps” or “degrees.”

This sundial is housed in the Archaeological Museum in Istanbul, and is dated as 1st century B.C. The accompanying sign has this info: The concave inner side of the half dome shaped dial is divided into twelve parts by eleven radial lines.  The rod, perpendicular to the center, is the pointer. The shadow of the pointer falls on the radial lines as the sun moves. Although the system of dividing the time passing between sunrise and sunset into twelve equal units was used in Mesopotamia as early as the Sumerian times this type of dial is known as the Babylonian dial.

The rod referenced above is missing from this sundial.  But you can see the rod in the sundial below, casting its shadow.  This artifact is located in the Ephesus Museum.

Whether what is intended in Isa. 38 is this type of sundial, or another system (steps, stairway) is meant, the principle is the same.  God miraculously returned the shadow to confirm to Hezekiah that He would extend his life as He had promised.