Paul’s Military Escort: From Jerusalem to Caesarea via Antipatris

Acts 23 records how Claudius Lysias, the Roman commander stationed in Jerusalem, upon learning of a Jewish plot to kill his prisoner, the Apostle Paul, provided for a military escort to Caesarea, the Capital. “And he called to him two of the centurions and said, ‘Get two hundred soldiers ready by the third hour of the night to proceed to Caesarea, with seventy horsemen and two hundred spearmen.’ 24 They were also to provide mounts to put Paul on and bring him safely to Felix the governor” (vv.23-24). These unusual measures were taken because Paul, although a Jew, was also a Roman citizen. It was upon previously learning that fact (Acts 22:25-29), that the Commander provided for Paul’s safe transport to the Governor’s residence, Herod’s Praetorium. Claudius Lysias certainly did not want responsibility for the assassination of a Roman citizen on his watch!

Their route from Jerusalem to Caesarea took them through Antipatris: “So the soldiers, in accordance with their orders, took Paul and brought him by night to Antipatris” (Acts 23:31).

This past March, Ferrell Jenkins and I saw the RACE Show (Roman Army and Chariot Experience) in the Roman amphitheater at Jerash of the Decapolis (in today’s Jordan). This helps us visualize the Roman soldiers/spearmen that would have accompanied Paul. 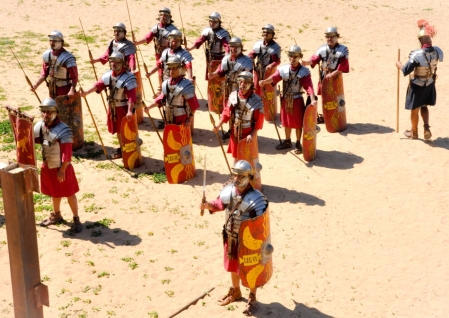 From there Paul was taken on to Caesarea: “But the next day, leaving the horsemen to go on with him, they returned to the barracks. When these had come to Caesarea and delivered the letter to the governor, they also presented Paul to him” (Acts 23:32-33). 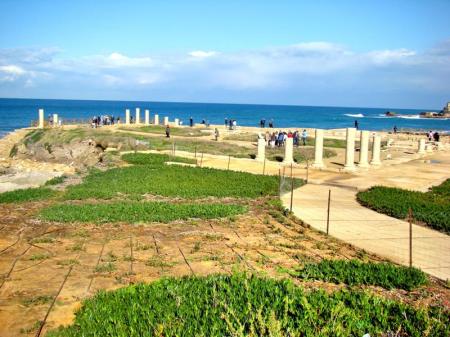 Caesarea on the Mediterranean coast. Ruins of the Palace. Paul was taken here. Photo ©Leon Mauldin.

The closing verse of Acts 23 records the Governor’s (Felix) reception of Paul: “‘I will give you a hearing after your accusers arrive also,’ giving orders for him to be kept in Herod’s Praetorium” (v.35). There is on-site at Caesarea some artwork that helps us to visualize the Praetorium. 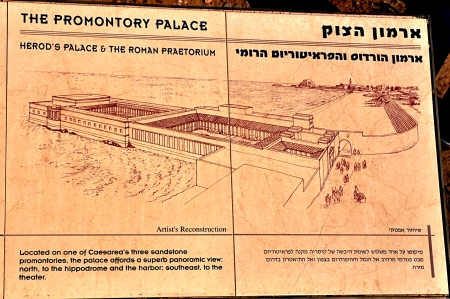