In our last post we mentioned that the Apostle Paul was in Tarsus from the point of Acts 9:30 until going to Antioch at the invitation of Barnabas in Acts 11:25.

One attraction in Tarsus is “Cleopatra’s Gate,” also called the “Sea Gate,” as well as “St. Paul’s Gate. 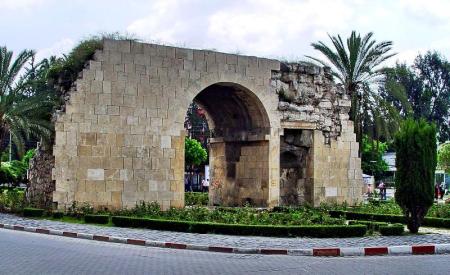 The Biblical Archaeological Society info re: this site included in The Biblical World in Pictures states:

This stone gateway is the only one of Tarsus’s three Roman city gates that has survived and is one of the few remnants of the city Paul knew that has not been destroyed or buried under the modern city of Turkish Tersous. Tarsus was connected by the Cydnus River to the Mediterranean; this was the gate that led into the city from the river. It is called Cleopatra’s Gate, commemorating a state visit that Queen Cleopatra made to Tarsus on her royal barge while Marc Antony was there in 38 B.C.E.

Others suggest that while the gate would mark the location of the Roman Gate, that the better evidence is that the structure that is visible is Byzantine.