One of the more impressive sites at Ephesus is the Celsus Library.  It was originally built in A.D. 110, by Consul Gaius Julius Aquila, in honor of his father, Gaius Julius Celsu Polemaeanus, governor of Asia A.D. 105-107.

Some suggest that the school of Tynannus may have been located to your left (Acts 19:9). 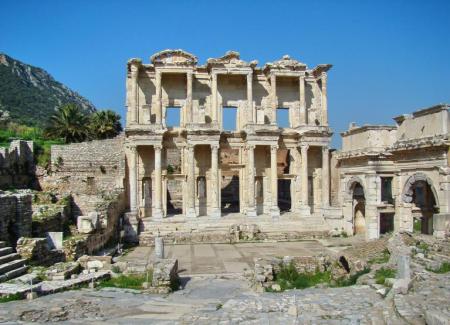 Next we look at the commercial agora (market place), where the craftsmen, including silversmiths and others, would have had their shops.

Apparently it would have been in this area, for example, where Demitrius the silversmith worked.  Luke tells what happened in Acts 19:

24 For a man named Demetrius, a silversmith who made silver shrines of Artemis, brought a great deal of business to the craftsmen. 25 He gathered these together, along with the workmen in similar trades, and said, “Men, you know that our prosperity comes from this business. 26 And you see and hear that this Paul has persuaded and turned away a large crowd, not only in Ephesus but in practically all of the province of Asia, by saying that gods made by hands are not gods at all. 27 There is danger not only that this business of ours will come into disrepute, but also that the temple of the great goddess Artemis will be regarded as nothing, and she whom all the province of Asia and the world worship will suffer the loss of her greatness.” (NET)

One lesson which continues to be reinforced as we visit biblical sites is the reliability of the scriptures.  Always remember that the Bible deals with real people, real places, and real events.  The Bible is fact, not fiction!