The city of Beth-shemesh was given to the Levites when they were given their possession by lot in the days of Joshua, following the Conquest of Canaan (Josh. 21:16). Years later, during the days of the Judges, the Philistines captured the ark in battle with Israel (1 Sam. 4), but when they were divinely punished they allowed the ark to return. The two cows pulling the cart from Philistian Ekron “headed straight for the road to Beth-shemesh” (1 Sam. 6:12).

Later, in the days of the Divided Kingdom, King Amaziah (Judah) challenged King Jehoash (Israel) to battle. This may have been in retaliation for the destruction and looting carried out by the Israelite mercenaries Amaziah had hired, but then sent back home (2 Chron. 25:6-13). Beth-shemesh was the meeting point of the two armies, which resulted in Amaziah being soundly defeated. The theological reason is given by the inspired historian: “But Amaziah would not listen, for it was from God, that He might deliver them into the hand of Joash because they had sought the gods of Edom.” It was because of Amaziah’s idolatry that God orchestrated events to punish Amaziah. Ironically, it was after God had given Amaziah victory in battle against Edom that Amaziah then decided to worship the gods of Edom!

Ferrell Jenkins and I had the opportunity to briefly see Beth-shemesh this past March.

Kiriath-jearim and Beth-shemesh in Israel

Today Ferrell Jenkins and I visited sites in Jerusalem, but for our post for now I wanted to note a couple of biblical sites we visited yesterday.

One was Kiriath-jearim. This location is of importance because the Ark of the Covenant was there from the days of Samuel (after Eli’s death and the Philistine destruction of Shiloh 1 Sam. 4-5). We read in 1 Samuel 6:21, “So they sent messengers to the inhabitants of Kiriath-jearim, saying, ‘The Philistines have brought back the ark of the LORD; come down and take it up to you.'”

At Kiriath-jearim. Our Lay of the Ark of the Covenant. Photo by Leon Mauldin.

Once the ark was returned to Israel by the Philistine enemies, ca. 1100 BC, it would remain there until King David made Jerusalem his capital, ca. 1003 BC, i.e. for 100 years. But first the ark came to Beth-shemesh. The biblical narrative explains how the hand of God was involved as two milk cows, with their calves kept behind, pulled a cart carrying the ark straight from Ekron of the Philistines to the border town of Beth-shemesh of Israel (1 Sam. 6).

Beth-shemesh, where the ark was returned from the Philistines. Photo by Leon Mauldin.

Our photo shows the suggested site in Beth-shemesh (in foreground) where the cows pulling the ark were slain as sacrifices. Our view looks toward Philistia in the distance (left from center), the direction from which the ark would have come. As stated above (1 Sam. 6:21), from Beth-shemesh the ark was taken to Kiriath-jearim, where it remained until the days of King David.

We have previously posted here on Kiriath-jearim and here on Beth-shemesh, with aerial photo.

In the biblical period of the Judges, when Eli was High Priest and judge, God allowed the Philistines to defeat apostate Israel, even allowing the Philistines to capture the ark of the covenant.  But as the Philistines gloated over their “prize” they were stricken with plagues.  This continued as the ark was moved from city to city; they were getting severely sick, and some died.

The Philistine leaders then decided to try an experiment to determine whether this was some strange coincidence or if in fact they were objects of the wrath of the God of Israel. They took two cows, each of which had a calf, and harnessed the cows to a new cart.  They secured the calves in their stalls.  The natural inclination of the cows would be to go to their calves.  So the Philistine leaders reasoned in this manner:

Take the ark of the LORD and place it on the cart; and put the articles of gold which you return to Him as a guilt offering in a box by its side. Then send it away that it may go. Watch, if it goes up by the way of its own territory to Beth-shemesh, then He has done us this great evil. But if not, then we will know that it was not His hand that struck us; it happened to us by chance (1 Samuel 6:8-9). 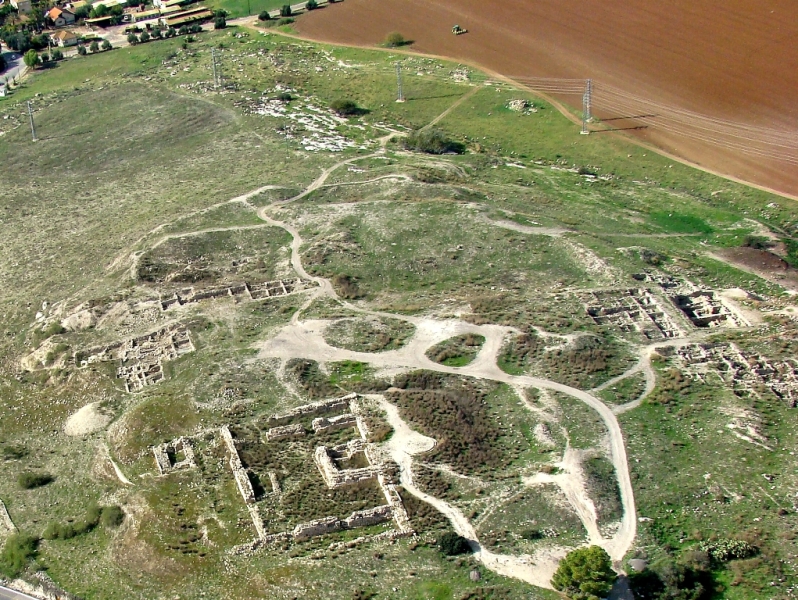 The Philistines placed the ark on the cart along with offerings to the Lord.  The text continues, “And the cows took the straight way in the direction of Beth-shemesh; they went along the highway, lowing as they went, and did not turn aside to the right or to the left. And the lords of the Philistines followed them to the border of Beth-shemesh” (v.12).

Can you imagine those cows mooing and crying as they made a bee-line from Philistia to Israelite territory, against their instinct but forced to yield to the hand of a Sovereign God?  Our photo above shows the ruins of biblical Beth-shemesh, the site referenced in the text.

From Beth-shemesh the ark was moved to Kiriath Jearim, where it would remain until the reign of David (2 Sam. 7:1).