Judah’s Captivity 597 BC; the Babylonian Chronicles

Some of my current studies include 2 Kings 24-25, which tell of the reigns of Judah’s last three kings: Jehoiakim (r. 609-597 BC), Jehoiachin (597 BC), and Zedekiah (597-586 BC). For so long down to that point in time, God’s people had repeatedly turn to idols, such as Baal (other names included Teshub, Hadad, etc.), the cultic fertility god who (supposedly) supplied rain for the crops. The contest with Baal prophets and Elijah should have manifestly demonstrated that Yahweh, not Baal, controls the rain, or lack there of (1 Kings 18). They forsook all the commandments of the LORD their God and worshiped and served Baal. It was for this determined apostasy that divine judgment was inevitable.

The “point of no return,” the inspired historian explains, was reached earlier in the days of Judah’s King Manasseh (r. 695-642 BC): “Surely at the command of the LORD it [the punitive destruction] came upon Judah, to remove them from His sight because of the sins of Manasseh, according to all that he had done, and also for the innocent blood which he shed, for he filled Jerusalem with innocent blood; and the LORD would not forgive” (2 Kings 24:3-4). Though there were great and extensive reforms under good King Josiah (r. 640-609 BC), Jeremiah lamented, “‘Judah has not turned to Me with her whole heart, but in pretense,’ says the LORD” (Jeremiah 3:10). Thus Judah went into Babylonian captivity for seventy years, beginning with a 605 BC invasion, then a second one in 597 BC, and a third and final in 586 BC, at which time the temple was burned and looted, and Jerusalem destroyed.

Our present article makes note of Jehoiachin (597 BC). He only reigned 3 months (2 Kings 24:8). At this time Nebuchadnezzar, king of Babylon invaded Judah and besieged Jerusalem. King Jehoiachin surrendered, and he, along with others, was deported to Babylon. It was during this deportation that the prophet Ezekiel was also taken captive, and would live and work among the other Judean captives by the River Chebar in Babylon, “in the land of the Chaldeans” (Ezekiel 1:1-2).

Jehoiachin was eighteen years old when he became king, and he reigned three months in Jerusalem; and his mother’s name was Nehushta the daughter of Elnathan of Jerusalem. He did evil in the sight of the LORD, according to all that his father had done.  At that time the servants of Nebuchadnezzar king of Babylon went up to Jerusalem, and the city came under siege.  And Nebuchadnezzar the king of Babylon came to the city, while his servants were besieging it.  Jehoiachin the king of Judah went out to the king of Babylon, he and his mother and his servants and his captains and his officials. So the king of Babylon took him captive in the eighth year of his reign.  He carried out from there all the treasures of the house of the LORD, and the treasures of the king’s house, and cut in pieces all the vessels of gold which Solomon king of Israel had made in the temple of the LORD, just as the LORD had said.  Then he led away into exile all Jerusalem and all the captains and all the mighty men of valor, ten thousand captives, and all the craftsmen and the smiths. None remained except the poorest people of the land.

It is fascinating when artifacts are located that have a bearing on the biblical record. Such is the case with this Babylonian Captivity of 597 BC, in the Babylonian records known as the Babylonian Chronicles. Several of these tablets are displayed in the British Museum. This one featured here records the Babylonian account of the 597 BC invasion referenced in the Bible. 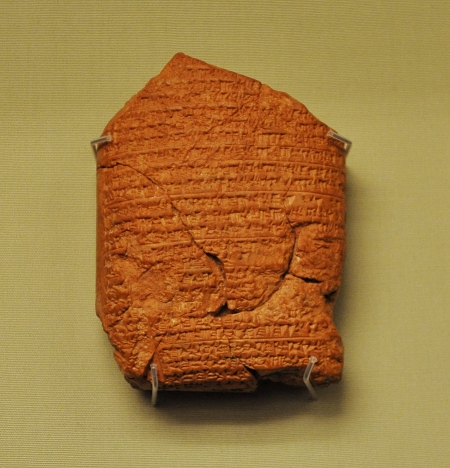 Babylonian Chronicle which records the 597 BC Babylonian Invasion of Judah. Photo by Leon Mauldin. British Museum.

This tablet was among others translated by scholar Dr. Donald J. Wiseman. An article in Biblical Archaeology Review has this information on this tablet:

Saved from the obscurity of the British Museum’s storerooms, this 3.25-inch by 2.5-inch clay cuneiform tablet is one of nine published by author Wiseman in 1956. The nine are part of the Babylonian Chronicles, an accurate record of the historic events in each king’s regnal year. They are just a tiny portion of the 90,000 tablets received by the British Museum between 1872 and 1889—a time when that famed institution did not even have the staff to catalogue the tablets.

The tablet’s obverse side recounts Babylon’s defeat of the Egyptian army at Carchemish in 605 B.C. and its conquest of Syria; Nebuchadnezzar’s succession to the Babylonian throne that same year and his acceptance of tribute from the kings of Syro-Palestine in 604 B.C.; the sack of Ashkelon in 603 B.C.; and the hitherto-unknown battle in 601 B.C. between the Babylonians and the Egyptians that ended inconclusively and which caused Jehoiakim, king of Judah, to align himself with Egypt. That proved a disastrous decision in light of subsequent events.

A paragraph on the reverse side of the tablet tells us just what those subsequent events were: “In the month of Kislev of his seventh year the king of Babylon [Nebuchadnezzar] mustered his army to march to Hatti-land [Syro-Palestine] and besieged the city of Judah [Jerusalem] and on the second day of Addar [15/16 March 597 B.C.] captured the city and seized its king [Jehoiachin]. He appointed there a king of his own choice [Zedekiah/Mattaniah] and took vast tribute, bringing it back to Babylon.” (Translation by Donald J. Wiseman.) A failed revolt ten years later in Judah ended in the utter destruction of the Jerusalem Temple and in the exile of most of the population to Babylon. (BAR Sep/Oct 1990, H. Shanks ed.).

Such artifacts as these (and so many others) lend credibility to the historicity and accuracy of the Bible.

This lion in glazed brick from the Processional Way, Babylon, dates back to Nebuchadnezzar, king of Babylon 605-562 BC. This lion (among other animals) is now in the Archaeology museum in Istanbul. Perhaps this can help us visualize the challenge to Daniel’s faith as he was cast into a den of lions by the Medo-Persian king, Darius.

A beautiful painting of ancient Babylon, built by Nebuchadnezzar, is displayed in the Oriental Institute Museum in Chicago.