There is a statue of the goddess Artemis housed in the Vatican Museum. 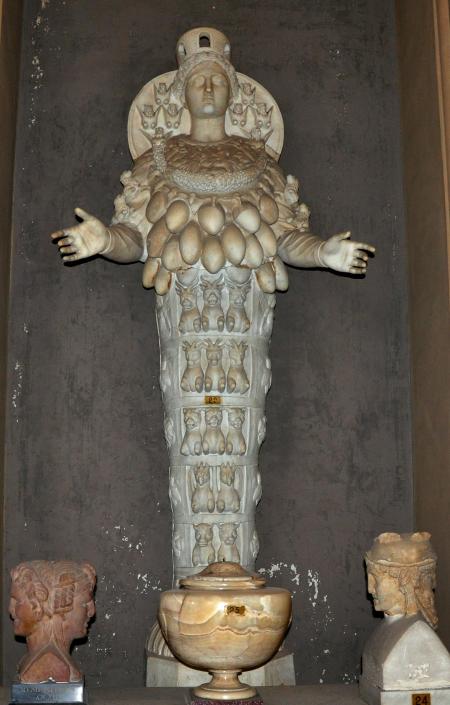 This is the goddess mentioned in Acts 19, in the context of Paul’s preaching efforts at Ephesus:

About that time there occurred no small disturbance concerning the Way. For a man named Demetrius, a silversmith, who made silver shrines of Artemis, was bringing no little business to the craftsmen; these he gathered together with the workmen of similar trades, and said, “Men, you know that our prosperity depends upon this business. You see and hear that not only in Ephesus, but in almost all of Asia, this Paul has persuaded and turned away a considerable number of people, saying that gods made with hands are no gods at all. Not only is there danger that this trade of ours fall into disrepute, but also that the temple of the great goddess Artemis be regarded as worthless and that she whom all of Asia and the world worship will even be dethroned from her magnificence.” When they heard this and were filled with rage, they began crying out, saying, “Great is Artemis of the Ephesians!” (verses 23-28).

The ISBE has this info:

She may, however, be identified with the Cybele of the Phrygians whose name she also bore, and with several other deities who were worshipped under different names in various parts of the Orient. In Cappadocia she was known as Ma; to the Syrians as Atargatis or Mylitta; among the Phoenicians as Astarte, a name which appears among the Assyrians as Ishtar; the modern name Esther is derived from it. The same goddess seems to have been worshipped by the Hittites, for a female deity is sculptured on the rocks at Yazili Kaya, near the Hittite city of Boghazkeui. It may be shown ultimately that the various goddesses of Syria and Asia Minor all owe their origin to the earlier Assyrian or Babylonian Ishtar, the goddess of love, whose chief attributes they possessed. The several forms and names under which she appears axe due to the varying developments in different regions.

Tradition says that Diana was born in the woods near Ephesus, where her temple was built, when her image of wood (possibly ebony; Pliny, NH, xvi. 40; Acts 19:35) fell from the sky. Also according to tradition the city which was later called Ephesus was founded by the Amazons, and Diana or Cybele was the deity of those half-mythical people. Later when Ephesus fell into the possession of the Greeks, Greek civilization partly supplanted the Asiatic, and in that city the two civilizations were blended together. The Greek name of Artemis was given to the Asiatic goddess, and many of the Greek colonists represented her on their coins as Greek. Her images and forms of worship remained more Asiatic than Greek. Her earliest statues were figures crudely carved in wood. Later when she was represented in stone and metals, she bore upon her head a mural headdress, representing a fortified city wall; from it, drapery hung upon each side of her face to her shoulders. The upper part of her body was completely covered with rows of breasts to signify that she was the mother of all life. The lower arms were extended. The lower part of the body resembled a rough block, as if her legs had been wrapped up in cloth like those of an Egyptian mummy. In later times her Greek followers represented her with stags or lions standing at her sides. The most renowned of her statues stood on the platform before the entrance to her temple in Ephesus. As the statues indicate, she impersonated the reproductive powers of men and of animals and of all other life.

We have previously referenced Artemis in posts here, here, here and here.

I’ve recently upgraded to Logos 5. In perusing the Faithlife Study Info Graphics, I noted their artist’s depiction of the temple of Artemis at Ephesus, with this info:

‎This temple, called Artemision, was one of the Seven Wonders of the Ancient World. Construction began in the mid-sixth century BC; more than a century later, it was the largest building in Rome, Greece, or Asia. Roughly four times the size of the Parthenon in Athens, it featured 127 columns, each measuring 60 ft. in height. It made Ephesus the center of Artemis worship.

Wikipedia Commons shares this photo of a model in Istanbul. 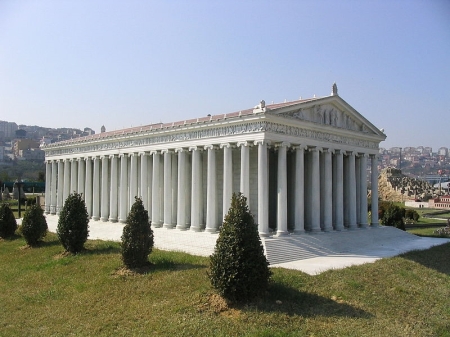 I was going through some photos of the ruins of that famous site in Ephesus when I saw this one, with ducks right at home in the swampy remains of what that ancient wonder: 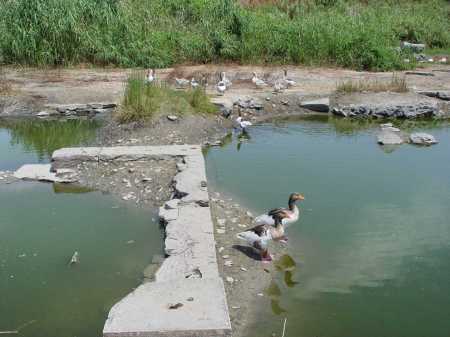 Ducks at ruins of Artemis Temple in Ephesus. Photo by Leon Mauldin.

What a difference the passing of time can make! In contrast to man’s transitory work, Daniel said that the God of heaven would set up a kingdom that would never be destroyed (Dan. 2:44). God’s eternal plan was to provide for man to be delivered from the power of darkness, and translated into the kingdom of His Son (Col. 1:13).

Sardis, a Dead Church with a Name

As we continue to make posts of the cities of the seven churches of Asia (Rev. 2-3), we now come to the city of Sardis. The city of Sardis was located on the river Pactolus, at the foot of mount Tmolus. The modern name is Sart.

Sardis was formerly the capital of the ancient Lydian Kingdom and was one of the greatest cities of the ancient world. It was here at Sardis that coined money was invented.

Twice in the city’s history it had fallen into the hands of its enemies because the people of Sardis failed to “watch” (once to the Persians, 546 B.C., and later to the Selucids (215 B.C.).   The church at Sardis addressed in Rev. 3 had failed to be as watchful as they should.  Jesus said, “You have a reputation that you are alive, but in reality you are dead” (Rev.3:1, NET).  They had a good name, but their true character did not match their reputation.  They needed to change that.

The city of Sardis was a center for the worship of the goddess Artemis.  The ruins of the temple were excavated by Howard C. Butler in the years 1910-1914. In our photo below you can see the ruins of the temple, and in the distance the city’s acropolis, on the edge of the Tmolus range. 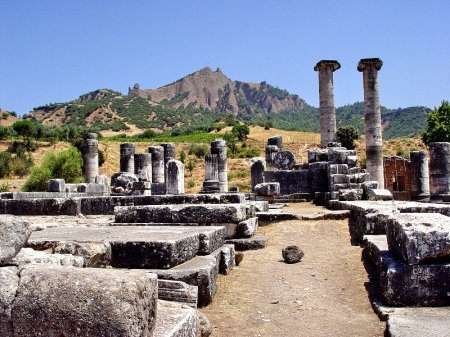 The history of this temple goes back to the 5th century B.C.  Over time, additions were made to the site.  On the lower portion of the grounds you can see the ruins of the Roman altar.  See our photo below. 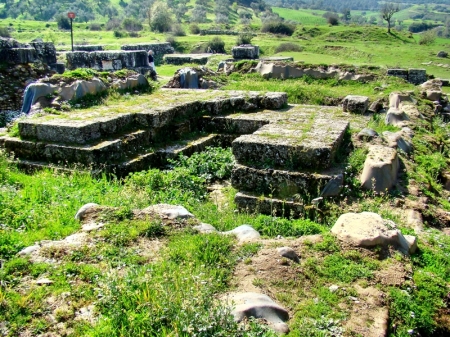 Our photo below shows the site with Tmolus to our back. The brown brick building at right foreground is a church building constructed about the 5th century A.D. 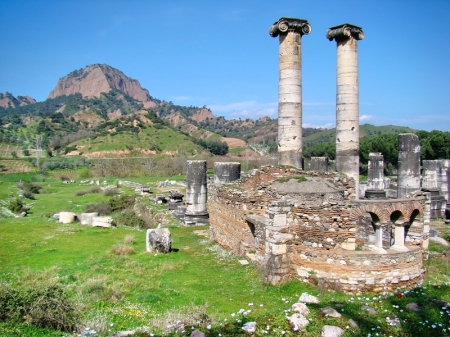 Remember to click on images for higher resolution.  More to come on Sardis!

The main street providing access from Ephesus’ harbor to the city is known as the Harbor Street, also the Arcadian Way, after Emperor Flavius Arcadius (reigned A.D. 395-408).  When Paul boarded a ship from Ephesus, or landed at Ephesus and then went into the city, this is the street he would have used. 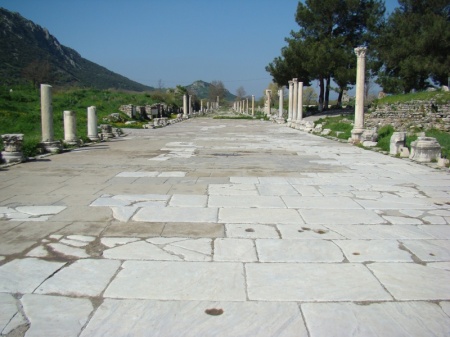 Not much is left of the temple of Artemis, what was at one time one of the Seven Wonders of the World.  A lone column remains, with a stork’s nest on the top.  You can see somewhat of the basic rectangular outline of the temple in our photo.

In the Ephesus Museum one may see some of the Artemis’ statues, such as the one in this photo: 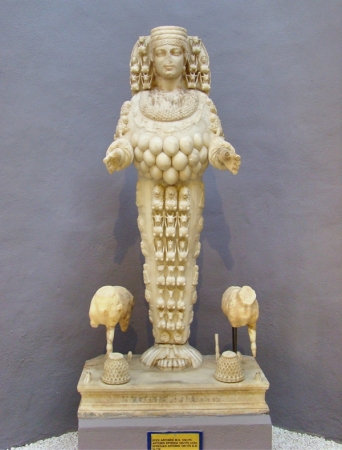