“They Let Go the Anchors”

Acts 27 is tells the exciting (and scary)  narrative of Paul’s (along with 276 passengers on the ship, v.37) voyage in the storm, shipwrecking at Malta in the Mediterranean en route to Rome. As they approached land, Luke writes, “Fearing that we might run aground somewhere on the rocks, they cast four anchors from the stern and wished for daybreak” (v.29). Then when it was day and they could see land, “And casting off the anchors, they left them in the sea while at the same time they were loosening the ropes of the rudders; and hoisting the foresail to the wind, they were heading for the beach” (v.40). There was no loss of life, and the group wintered at what turned out to be Malta (28:1ff.).

At En Gev on the Sea of Galilee I photographed some anchors which can serve as good illustrations of the Acts 27 text. 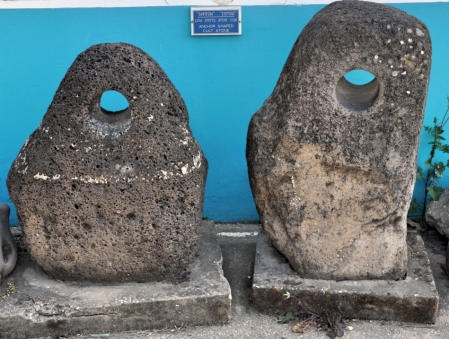 Such artifacts are useful in helping to visualize the text and may be used in PPT or printed as handouts.