Ram Caught in a Thicket, from Ur of the Chaldeans

In 1927 the archaeologist Leonard Woolley uncovered spectacular finds in southern Mesopotamia, in the ancient city he had identified as Ur, home of Abraham. The treasury of his finds included this figure, known as “The Ram in the Thicket.” 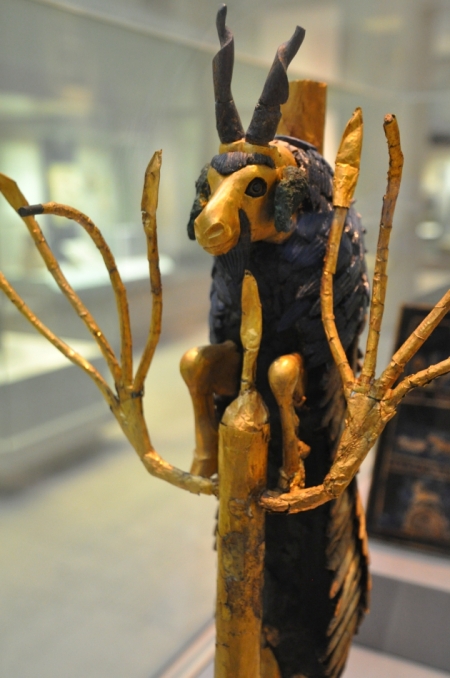 Ram in the Thicket. British Museum. Photo by Leon Mauldin.

This statuette is composed of gold, silver, copper, lapis, shell and coral. Two of these were in what is called “the Great Death Pit.” The other is housed in the University of Pennsylvania Museum of Archaeology and Anthropology.

This figure is illustrative of the ram which Abraham offered at Moriah, in the stead of Isaac his son (Gen. 22:13). This figure here is actually a male goat.

Interestingly, this artifact predates Abraham by a few centuries.

Fant and Reddish suggest that

. . . the discoveries at Ur are a significant indication of an amazing level of cultural sophistication in an early period in the locale identified as the birthplace of the father of the Hebrews. If Abraham and his family came from Ur, a city of such considerable cultural advancement, to the tents of the land of Canaan, it further dramatizes the biblical story of his sacrificial following lowing of the promises of an unknown God. (Clyde E. Fant; Mitchell G. Reddish. Lost Treasures of the Bible: Understanding the Bible through Archaeological Artifacts in World Museums, Kindle Locations 580-581. Kindle Edition.)

Beersheba, Home of the Patriarchs

In our previous post we mentioned how Jacob fled from his home in Beersheba to Haran, of Mesopotamia.  For the short term he was running for his life; for the long term he married (four wives as it turned out) and had children, including twelve sons who would become the heads of the twelve tribes of Israel.

See map below to locate Beersheba.

Beersheba was the home of the patriarch Abraham as well as at times that of Isaac, and later Jacob as we have indicated.  There was a well there which Abraham dug.  The Philistine king Abimelech received seven ewe lambs from Abraham as confirming that the well was indeed Abraham’s (Gen. 21:22-30).  “Therefore he called that place Beersheba, because the two of them swore an oath there” (v.31).  The text goes on to say, “Then Abraham planted a tamarisk tree in Beersheba, and there called on the name of the LORD, the everlasting God” (v.33).

Our photo of Beersheba depicts both a well as well as a tamarisk tree.

Beersheba, with well and tamarisk tree. Photo by Leon Mauldin.

A good deal of excavation has been done at Beersheba.  See photo below. 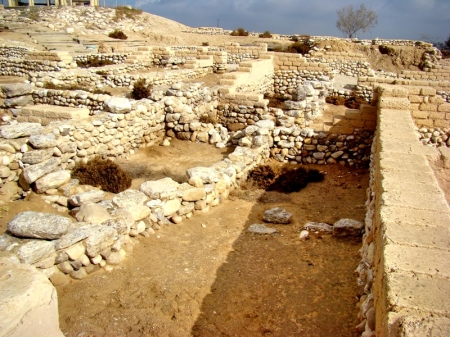