The Apostle Paul asked and answered a rhetorical question:

24 Do you not know that those who run in a race all run, but only one receives the prize? Run in such a way that you may win. 25 Everyone who competes in the games exercises self-control in all things. They then do it to receive a perishable wreath, but we an imperishable. 26 Therefore I run in such a way, as not without aim; I box in such a way, as not beating the air; 27 but I discipline my body and make it my slave, so that, after I have preached to others, I myself will not be disqualified. (1 Corinthians 9:27-27).

To illustrate the great effort and focus that should be expended and maintained for what Paul terms “an imperishable crown,” he points to the games (apparently the Isthmian games) as an example. The Isthmian Games were similar to the Olympic Games, and took place every two years at Isthmia near Corinth. This illustration would have struck home to Paul’s Corinthian audience. 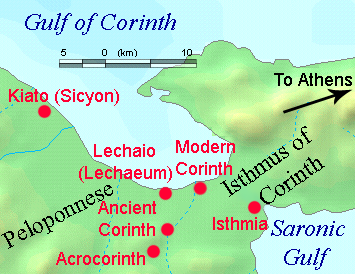 Location of Isthmia in proximity to Corinth. Wikimedia Commons.

Our photo shows the ancient site of Isthmia. In addition to the excavation that may be seen here, at center (and slightly right, indicated by vertical metal stakes) you may see the Classical stadium starting line for the runners. 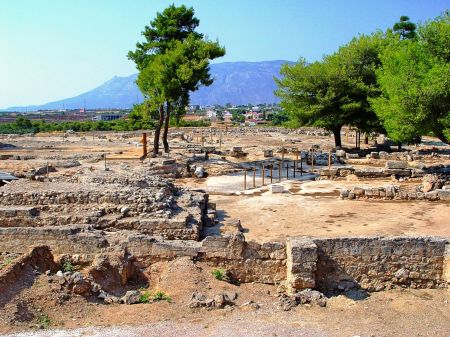 The Isthmian Games occurred every two years and should have occurred during Paul’s stay (Acts 18:11); they were held in the spring of 49 and 51 C.E. When combined with the imperial games every fourth year (i.e., every other celebration of the Isthmian Games), the Isthmian Games were the Great (as opposed to the Lesser) Isthmia. There were four Greek games, often mentioned together: the Olympic, the Pythian, the Nemean, and the Isthmian. The Isthmian “were the most splendid and best attended” of the pan-Hellenic festivals next to the quadrennial Olympics.

Whether or not Paul attended the Isthmian Games, which would have occurred during his stay there, he would have known about them, and it seems plausible that he would have made use of them somehow to reach people passing through, as Diogenes the Cynic reportedly did. The Isthmian Games were well known among educated urban people throughout the Roman world. Large numbers would gather from many diverse cities, discussing current events, at the Isthmian Games (Polyb. 18.46.1). (Both genders would also be present.) Many gave readings and orations besides other entertainments; a local preacher might be ignored by the Corinthians, who were accustomed to him, yet draw a crowd of visitors. It was a strategic place to make announcements that would reach all Greece. (Keener, C. S., 2014. Acts: An Exegetical Commentary: 15:1–23:35 Vol. 3, pp. 2758–2760. Grand Rapids, MI: Baker Academic).

Paul referred to the “perishable crown” that was awarded to the winner of the race. This may be visualized by our photo here:

A “perishable” crown. Wreath given to the victor, a Greek athlete. Photo ©Leon Mauldin.

Our photo features a close up of the head of a running athlete and dates back to the late Hellenistic period. This statue was retrieved from the Aegean Sea off the coast of Kyme, and is displayed at the Izmir Museum (biblical Smyrna).

Salvation is by grace through faith. At the same time God rightfully expects total commitment and devotion to Him.

This entry was posted on Wednesday, December 11th, 2019 at 3:34 PM and is filed under Archaeology, Bible History and Geography, Bible Places, Corinth, Greece, New Testament, photography, Travel. You can follow any responses to this entry through the RSS 2.0 feed. You can leave a response, or trackback from your own site.