Luke 2 narrates the night of the Savior’s birth, when the good news was first announced to Bethlehem-area shepherds:

Now there were in the same country shepherds living out in the fields, keeping watch over their flock by night. 9 And behold, an angel of the Lord stood before them, and the glory of the Lord shone around them, and they were greatly afraid. 10 Then the angel said to them, “Do not be afraid, for behold, I bring you good tidings of great joy which will be to all people. 11 “For there is born to you this day in the city of David a Savior, who is Christ the Lord. 12 “And this will be the sign to you: You will find a Babe wrapped in swaddling cloths, lying in a manger.” 13 And suddenly there was with the angel a multitude of the heavenly host praising God and saying: 14 “Glory to God in the highest, And on earth peace, goodwill toward men!” 15 So it was, when the angels had gone away from them into heaven, that the shepherds said to one another, “Let us now go to Bethlehem and see this thing that has come to pass, which the Lord has made known to us.” 16 And they came with haste and found Mary and Joseph, and the Babe lying in a manger. 17 Now when they had seen Him, they made widely known the saying which was told them concerning this Child. 18 And all those who heard it marveled at those things which were told them by the shepherds. (Luke 2:8-18, NKJV). 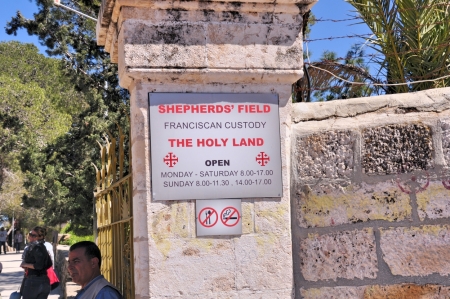 When one visits Bethlehem there is the opportunity to see the area designated as “Shepherd’s Field,” the Franciscan site located  on the east side of Bethlehem. This helps us to visualize where the shepherds would have been that night when the angel informed them of Jesus’ birth in our text above.

On most other occasions when I’ve been here the fields were brown and dry. This past March 2019 they were green.

Our group gathered in a nearby cave.

Here we discussed the occasion of Jesus’ birth, and also took advantage of the natural acoustics to sing. Visiting Bethlehem gave us the opportunity to contemplate the wonderful plan of God, that Eternal Deity, the Eternal Word, became man! “And the Word became flesh and dwelt among us, and we beheld His glory, the glory as of the only begotten of the Father, full of grace and truth” (John 1:14).

This entry was posted on Friday, September 13th, 2019 at 4:19 PM and is filed under Bethlehem, Bible History and Geography, Bible Places, Israel, New Testament, photography, Travel, Uncategorized, West Bank. You can follow any responses to this entry through the RSS 2.0 feed. You can leave a response, or trackback from your own site.

One Response to Shepherds’ Field in Bethlehem

Leave a Reply to Keith B. Isbell Cancel reply