St. Paul Outside the Walls

My group arrived safely Tuesday morning in Rome. We visited the Papal Basilica of St. Paul outside the Walls, as well as other stops, including the catacombs, as time permitted before dinner. This building was constructed to honor the martyrdom of Paul.

The facade at the quadriportico at the Basilica of st. Paul outside the Walls. Photo by Leon Mauldin.

As a result of the Edict of Milan in the year 313 AD, the official persecution of Christians cease. The Emperor Constantine had a basilica built over the tomb venerated as that of the Apostle Paul. 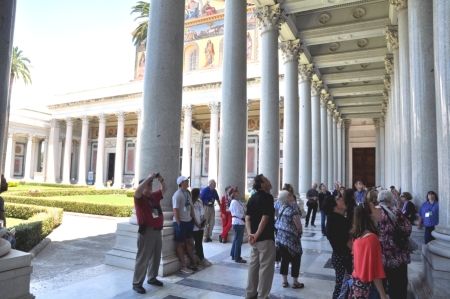 Group shot at the basilica. Photo by Leon Mauldin.

Group shot at colonnade at basilica. Photo by Leon Mauldin.

All of our group is well. More to come!

This entry was posted on Tuesday, June 5th, 2018 at 11:35 PM and is filed under City Walls, Italy, photography, Roman Empire, Rome, Travel, Uncategorized. You can follow any responses to this entry through the RSS 2.0 feed. You can leave a response, or trackback from your own site.

3 Responses to St. Paul Outside the Walls