Tel Lachish, where King Amaziah of Judah Was Killed

“From the time Amaziah turned from following the LORD, conspirators plotted against him in Jerusalem, so he fled to Lachish. But they sent assassins after him and they killed him there” (2 Chronicles 25:27, NET). 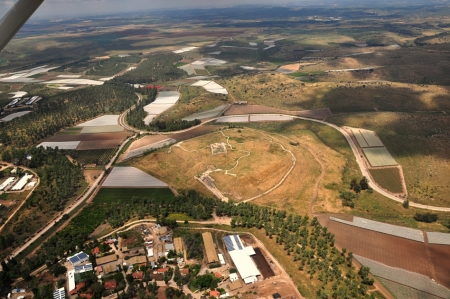 Tel Lachish at center. View is from the southwest. Photo ©Leon Mauldin.

Our photo gives the geographical setting for the biblical text, which tells of the assassination of one of Judah’s kings during the “Divided Kingdom” period. Amaziah reigned 796-767 BC. He is described by one author as “a mediocre king who suffered the consequences of his compromises” (Shepherds Notes, The Kings of Judah, p.79).

Later the city of Lachish would be one of 46 fortified cities captured by the Assyrian king Sennacherib, in 701 BC. His siege-mound formed for that invasion can still be seen at the southwest corner of tel Lachish.

We previously wrote about Lachish here and here.