The Garden of Gethsemane

“When Jesus had spoken these words [Farewell Discourse/Prayer, John 14-18], He went forth with His disciples over the ravine of the Kidron, where there was a garden, in which He entered with His disciples” (John 18:1, NASB). Matthew’s record states, “Then Jesus came with them to a place called Gethsemane, and said to His disciples, ‘Sit here while I go over there and pray.'” 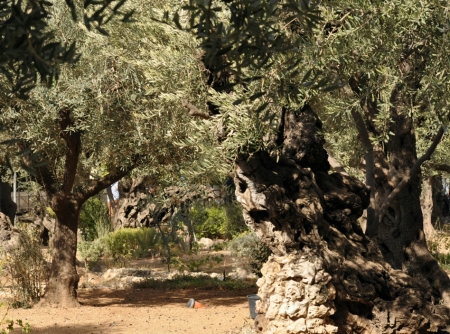 Ancient olive trees on the Mt. of Olives. The Garden of Gethsemane was in this area. Photo by Leon Mauldin.

The meaning of Gethsemane is “olive press,” and therefore not a “garden” in the ordinary sense of the word, but rather an olive grove that contained an olive press. Though we cannot know the exact spot where Jesus went for prayer that awful night before His crucifixion, it would be situated on the Mount of Olives just east of Jerusalem and across the Kidron Valley.

It would be here that Jesus went with His disciples (minus Judas; see John 13:30) to pray. “They came to a place named Gethsemane; and He said to His disciples, ‘Sit here until I have prayed.'” (Mark 14:32, NASB). We get somewhat of a glimpse of the horrible terror of that night as Luke writes, “And being in agony He was praying very fervently; and His sweat became like drops of blood, falling down upon the ground” (22:44, NASB). He submitted willingly to the Father’s will, because there was no other way that God could be both Just and our Justifier (Romans 3:21-26).

So it was then at the site of Gethsemane that Jesus was betrayed by His disciple Judas, was arrested and from there led away to a series of trials before the Jews and the Romans, and then crucified. But then on the third day “was declared the Son of God with power by the resurrection from the dead, according to the Spirit of holiness, Jesus Christ our Lord” (Rom. 1:4, NASB). Hallelujah, What a Savior!

This entry was posted on Wednesday, February 1st, 2017 at 2:41 PM and is filed under Bible History and Geography, Bible Places, Bible Study, Israel, Jerusalem, New Testament, photography, Travel, Uncategorized. You can follow any responses to this entry through the RSS 2.0 feed. You can leave a response, or trackback from your own site.