Traveling in Israel: Gibeon and More!

Today was a delightful day in Israel. We were able to see biblical sites from Jerusalem westward all the way to the coastal Philistine city of Gath.

Just north of Jerusalem (OT territory of Benjamin) is Gibeon, (Arabic El-Jib). This was formerly the Canaanite city that deceived Joshua and the men of Israel by pretending to be from a great distance, and thus entered into a covenant with Israel during the days of the Conquest (Joshua 9). There are subsequently several biblical references to this site. 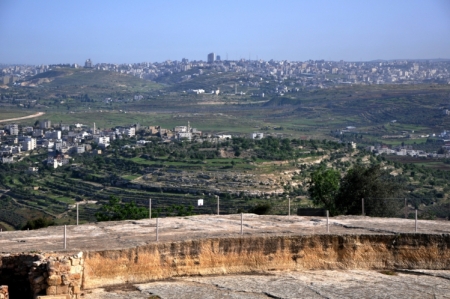 Gibeon at center of photo. Many OT texts refer to this site. Photo by Leon Mauldin.

We have previously posted on Gibeon here and here.

Today we also saw Kiriath-Jeariam and  numerous sites in the Shephalah, including the valley of Elah, where David killed Goliath, Lachish, Beth-Shemesh, and the Philistine city of Gath, plus others. More on these later!

This entry was posted on Thursday, April 7th, 2016 at 2:37 PM and is filed under Archaeology, Bible History and Geography, Bible Study, Israel, Old Testament, photography, Travel, Uncategorized. You can follow any responses to this entry through the RSS 2.0 feed. You can leave a response, or trackback from your own site.

One Response to Traveling in Israel: Gibeon and More!