It is fascinating to view the gates of Old Jerusalem!

The Damascus Gate is located on the north side of Jerusalem, so named because this would be the direction going out of Jerusalem to Damascus, ca. 150 miles NNW. The Jews call this gate the Shechem Gate, and the Arabs call it Bab el-Amud.

along the present north wall dramatically accents the spot that has been the main north entrance to Jerusalem for almost two millennia. R. W. Hamilton’s sounding here in 1937 and Basil Hennessey’s excavations in the 1960s; have revealed, below the modern entrance, layer upon layer of earlier gateways, reaching back through Arab, Crusader and Byzantine constructions to Roman Age foundations. The earliest certain construction here dates to Aelia Capitolina, the second to fourth-century C.E. city of Hadrian, but both Hamilton and Hennessey felt they found evidence that Hadrian’s gateway was built on foundations that went back to the Second Temple period. BAS Biblical World in Pictures. (2003).

Hadrian had built a triple-arched gateway to serve as entrance here. The eastern arch is well-preserved. 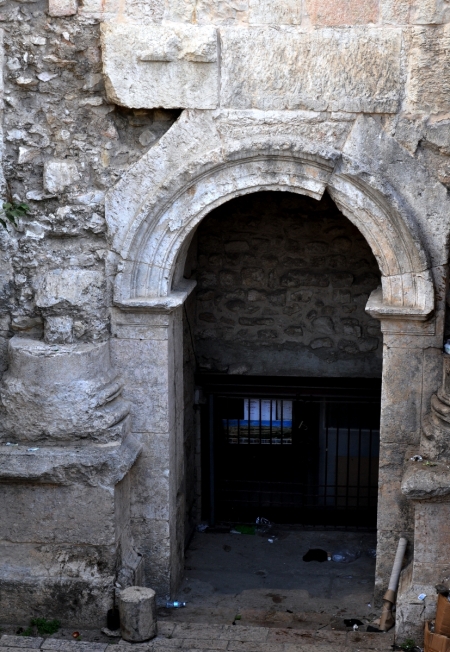 The Latin inscription above the keystone of the arch says, “…according to the decurians [the city council] of Col[onia] Ael[ia] Cap[itolina],” Hadrian’s designation for Jerusalem.

This entry was posted on Tuesday, November 10th, 2015 at 6:00 PM and is filed under Archaeology, Bible History and Geography, Bible Study, Gates, Israel, Jerusalem, New Testament, photography, Travel. You can follow any responses to this entry through the RSS 2.0 feed. You can leave a response, or trackback from your own site.