While taking a group to Italy (2012) I had the occasion to visit the Vatican Museum in Rome, where among other many artifacts, I photographed a statue of the Greek goddess Hera.

There is a replica of the temple of Hera in central Alabama:

The Olympian center welcomes visitors with a video presentation of jasmine hill’s history and a display of Olympic memorabilia from the games of past years. a tour of jasmine hill, now completely accessible to visitors with disabilities, offers spectacular and ever-changing views, including our full-scale replica of the temple of Hera ruins as found in Olympia, Greece, the birthplace of the Olympic flame. http://www.jasminehill.org/

Hera is the wife and one of three sisters of Zeus in the Olympian pantheon of Greek mythology and religion. Her chief function was as the goddess of women and marriage. Her counterpart in the religion of ancient Rome was Juno. The cow, lion and the peacock were considered sacred to her. Hera’s mother is Rhea and her father Cronus.

Portrayed as majestic and solemn, often enthroned, and crowned with the polos (a high cylindrical crown worn by several of the Great Goddesses), Hera may bear a pomegranate in her hand, emblem of fertile blood and death and a substitute for the narcotic capsule of the opium poppy. Scholar of Greek mythology Walter Burkert writes in Greek Religion, “Nevertheless, there are memories of an earlier aniconic representation, as a pillar in Argos and as a plank in Samos.” Hera was known for her jealous and vengeful nature against Zeus’s lovers and offspring, but also against mortals who crossed her, such as Pelias. Paris also earned Hera’s hatred by choosing Aphrodite as the most beautiful goddess. 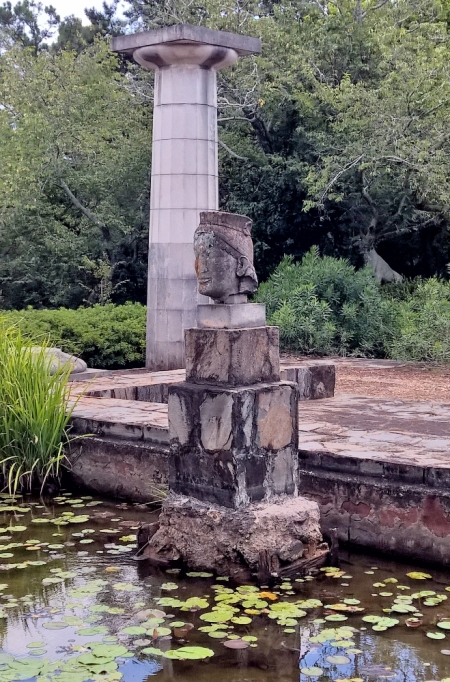 Bust of the Greek goddess Hera at temple site. Photo by Leon Mauldin.

There are the ancient remains of a temple devoted to Hera at Agrigento, a city on the southern coast of Sicily. (That location is included in my planned itinerary for Sicily/Italy March 2016.)

Personal note: We have not been posting much for the last several weeks due to some family sickness and deaths, and the priority which that rightly requires. We hope to be posting more regularly now in the near future. Thank you for your patience.

This entry was posted on Tuesday, August 25th, 2015 at 5:08 PM and is filed under Archaeology, Bible History and Geography, Bible Study, Greece, photography, Sicily, Temples, Travel. You can follow any responses to this entry through the RSS 2.0 feed. You can leave a response, or trackback from your own site.