During the 2nd Missionary Journey, a milestone was reached when Paul left Troas (of Asia Minor) to sail across the Aegean to preach on European soil. The text reads, “So putting out to sea from Troas, we ran a straight course to Samothrace, and on the day following to Neapolis” (Acts 16:11).

We had the occasion recently to visit Neapolis, modern Kavala. Neapolis was colonized by the Athenians in the 5th Century BC.  It was taken by Philip of Macedon in the 4th century BC. Neapolis served as the port to Philippi, where Paul first preached on European soil, and it continues to serve as an important port today.

One impressive site is the aqueduct of  Suleiman the Magnificent, AD 16th century built. This landmark was built on the remains of the previous Roman aqueduct. 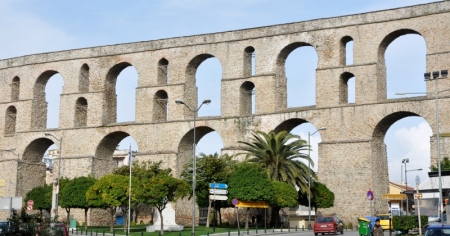 Aqueduct of Suleiman the Magnificent at Neapolis. Photo by Leon Mauldin.

Here is a view of the harbor of Neapolis/Kavala. It is thrilling to know that Paul used this port city in his travels.

A portion of the acropolis may be seen in background at left.

This entry was posted on Saturday, May 9th, 2015 at 8:10 PM and is filed under Bible History and Geography, Biblical Interpretation, Greece, New Testament, photography, Travel. You can follow any responses to this entry through the RSS 2.0 feed. You can leave a response, or trackback from your own site.