The Propylaea (entrance before the gate) still stands as the access to the Acropolis today. This monumental entrance gate was commissioned by the great statesman and builder of the Acropolis, Pericles. Construction was begun in 437 B.C. 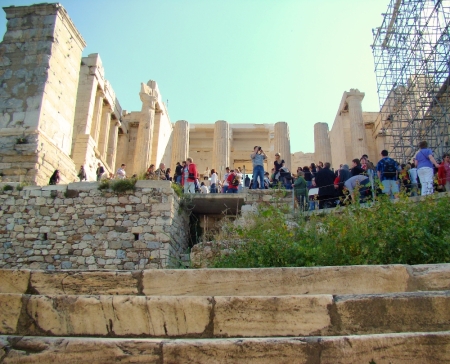 Fant and Reddish have this information:

The Propylaea (“before the gate”) visible today is the fourth of such structures to be built at this site; earlier ones were destroyed in various wars. The road from the agora below, the Panathenaic Way, led up to this point. A flight of marble steps ascends to the hall of the Propylaea. One step is of gray Eleusinian marble; the others are of white Pentelic marble. The monumental pedestal (25 feet tall) on the left of the steps originally was designed for a statue with a chariot and four horses to honor King Eumenes II of Pergamum for his contribution of the Stoa of Eumenes. Later it was reinscribed with a dedication to Marcus Agrippa in honor of the odeion he contributed to the agora. Designed by the architect Mnesicles and begun upon the completion of the Parthenon (437 B.C.E.), the Propylaea consisted of a central section with five doorways, originally fitted with wooden doors, and projecting wings on either side. The wing on the left side, the north wing, was known as the Pinakotheke, or art gallery, because of the magnificent collection of paintings inside. In 150 C.E. Pausanius named a number of the paintings he could recognize, including some by Polygnatus of Homer (5th century B.C.E.). The room was used for official banquets by dignitaries who reclined on couches in the Greek fashion. The wing on the right side, the south wing, could not match the other in design because of the Temple of Athena Nike and other buildings that impinged upon it. This wing was never completed due to the start of the Peloponnesian War (431 B.C.E.). (A Guide to Biblical Sites in Greece and Turkey).

We are looking forward to seeing Athens again in a couple of months.

This entry was posted on Friday, January 23rd, 2015 at 8:56 AM and is filed under Athens, Bible History and Geography, Bible Places, Greece, New Testament, Old Testament, photography, Propylaea, Travel. You can follow any responses to this entry through the RSS 2.0 feed. You can leave a response, or trackback from your own site.