The first mention of Mount Ebal is Deuteronomy 11:29: “Now it shall be, when the LORD your God has brought you into the land which you go to possess, that you shall put the blessing on Mount Gerizim and the curse on Mount Ebal.”

More instructions were to follow in Deut. 27. When Israel crossed over to receive the promised land of Canaan, they were to go to Mount Gerizim and Mount Ebal, which are situated opposite each other, with Shechem in between. Six tribes were to stand on Mount Gerizim (representing the blessings of the law, conditioned upon obedience), and the other six on Mount Ebal (representing the curses/punishment resultant from disobedience).

Joshua 8 shows Israel’s compliance with God’s instructions. The Levites and Joshua were positioned at Shechem. There all the blessings and curses of the law were read, and all the people shouted, “Amen.”

It is significant that Shechem is where childless Abraham stood when God promised Canaan to his descendants (Genesis 12:6,7). Now his descendants, the nation of Israel, were there to receive the promise, to stake their claim to the land. But more was involved than their receiving the land–it was based on their covenant relationship with their God.

Our photo shows Mount Ebal, the mount of cursing. You will notice how barren it is; very little grows there. 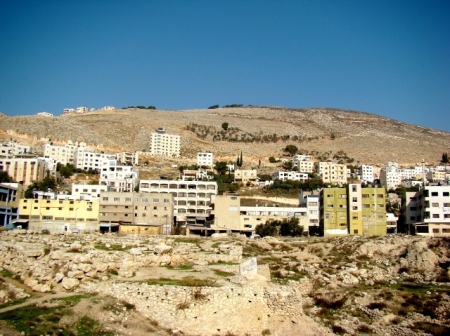 In the foreground you can see the ruins of ancient Shechem. Click image for larger view.

Dor on the Coastal Plain

I’ve been enjoying my Holman Bible Atlas on my Kindle Fire by Thomas V. Brisco. In his section on “Regions and Subdivisions” in the land of Israel he looks at the four major longitudinal zones that are characteristic of the  land, the first of which is the coastal plain. He includes a brief mention of the plain of Dor. “One of the most important harbors of Palestine, Dor gave the plain a strategic importance.”

This map shows the location of Dor, the harbor city and the plain running north and south and for a short distance to the east.

Dor, an important harbor in ancient Israel. Map by Bibleatlas.com.

Here is a view of the harbor.

Harbor of Dor on Coast of Israel. Photo by Leon Mauldin.

Here you can see some of the excavations (from a distance) at the city of Dor.

We previously posted on Dor here.