We continue to explore the Roman Forum. In our photo below we see the Tabularium, the large building in the back. 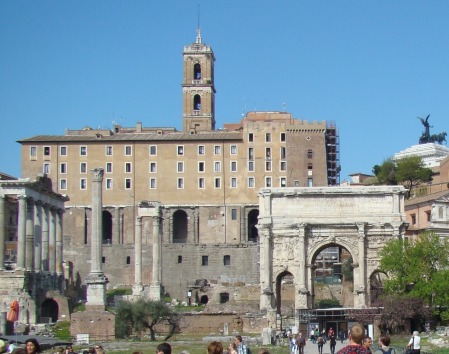 “Tabularium” is a term for a record building. A number of other tabularia were scattered around Rome and other ancient Roman cities, but this article is about the prototype example.

The Tabularium was the official records office of ancient Rome, and also housed the offices of many city officials. Situated within the Roman Forum, it was on the front slope of the Capitoline Hill, below the Temple of Jupiter Optimus Maximus, to the southeast of the Arx and Tarpeian Rock.

Within the building were the remains of the temple of Veiovis. In front of it were the Temples of Vespasian & Concord, as well as the Rostra and the rest of the forum. Presently the Tabularium is only accessible from within the Capitoline Museum, although it still affords an excellent panoramic view over the Forum.

The Tabularium was first constructed around 78 BC, by order of M. Aemilius Lepidus and Q. Lutatius Catulus. It was later restored and renovated during the reign of the Emperor Claudius, about 46 AD. (Wikipedia).

The lower level, the gray portion, is the Roman period; upper level was built later.

that legislation at the turn of the first century A.D. called for a legitimately born child of Roman citizens to be registered within thirty days of birth. Children born in the provinces would be legally acknowledged (professio) before the Roman provincial authority at the public record office (tabularium publicum). The professio was then entered in the register (album professionum). We do not know if Paul’s birth was before or after this legislation, but some such formal procedure had to have been in effect earlier. At regular intervals a citizen’s name, age, status and property holdings would thereafter be recorded by census. (Dictionary of New Testament Background: A Compendium of Contemporary Biblical Scholarship.)

At right in the photo you can see the Arch of Septimius Severus, dedicated in AD 203.

At present I am en route to Cyprus to join Ferrell Jenkins for a few days of photographing biblical sites, and biblically related sites, in Cyprus and Turkey.

This entry was posted on Tuesday, May 15th, 2012 at 10:06 AM and is filed under Bible History and Geography, Italy, photography, Roman Empire, Rome, Travel, Uncategorized. You can follow any responses to this entry through the RSS 2.0 feed. You can leave a response, or trackback from your own site.