The Roman Forum was in ancient times at the very hub of western civilization. 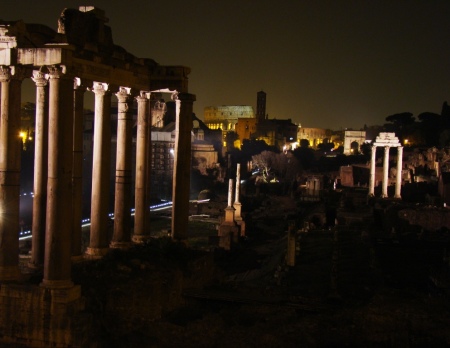 The Roman Forum (Latin: Forum Romanum, Italian: Foro Romano) is a rectangular forum (plaza) surrounded by the ruins of several important ancient government buildings at the center of the city of Rome. Citizens of the ancient city referred to this space, originally a marketplace, as the Forum Magnum, or simply the Forum. It was for centuries the center of Roman public life: the site of triumphal processions and elections, venue for public speeches, criminal trials, and gladiatorial matches, and nucleus of commercial affairs. Here statues and monuments commemorated some of the city’s most notable figures. Located in the small valley between the Palatine and Capitoline Hills, the Forum today is a sprawling ruin of architectural fragments and intermittent archeological excavations attracting numerous sightseers (Wikipedia).

It was here at the Forum, located between the Capitoline and Palatine hills, that justice was dispensed during the days of the Roman Republic and Empire (509 BC – AD 476). It is thought by some scholars that Paul’s appeal before Caesar would have been heard at the Basilica Julia.