Our previous entry was on Azazel, the Scapegoat. See here. I wanted to follow-up with a bit more information on the word Azazel from The Theological Wordbook of the Old Testament (Eds. Harris, Archer, and Waltke):

The actual use and meaning of this word in Lev 16 is at best uncertain. However, regardless of its precise meaning, the significant dimension is the removal of the sins of the nation by the imposition of them on the goat. In this passage sin seems to be hypostatized [to treat or represent as concrete reality] and therefore readily transferable to the goat. Indeed vss 21 and 22 state that this goat is to bear away the sin of the people. Such a ritual would illustrate vividly the physical removal of defilement from the camp to a solitary place where it would no longer infest the nation.

A parallel to the scapegoat can be seen in the ritual for a recovered leper. Two birds were selected. One was to be killed and both the leper and the living bird were to be touched with its blood. Then the living bird was released. This bird carried away the evil, the leprosy itself, into the open field and then the leper was pronounced clean (Lev 14:1–9). . .

This concept of the removal of guilt can be seen in Ps 103:12 where God “removes” our transgressions from us.

In the NT John the Baptist identified Jesus as the Lamb of God which takes away the sins of the world (Jn 1:29, 36). This language is sacrificial, yet nowhere in the Law is a lamb spoken of as a bearer of the people’s sins. The paschal lamb is not a sin offering. The description of the Savior as a lamb is unknown to late Judaism. Furthermore, the phrase “the lamb of God” is an unparalleled genitive combination. John may have had in mind that Christ as the paschal lamb bespeaks our great deliverance from the bondage of sin. However, what seems more likely is that he had a complex of ideas in mind. Some words of Isa 53 are discernible here: “as a sheep led to the slaughter, and a lamb dumb before his shearers … whose soul was made a guilt offering … and who bore the sin of many.” But also discernible here is an allusion to the scapegoat. This fact is clearly seen in the words “taketh away” (cf. I Jn 3:5). In Christ are consummated all the atonement concepts of the OT (pp.657-658).

The instructions of Leviticus 16 were given while Israel was encamped at the foot of Mt. Sinai. In our photo here you can see traditional Mt. Sinai, Jebel Musa, as you look to upper right in photo. 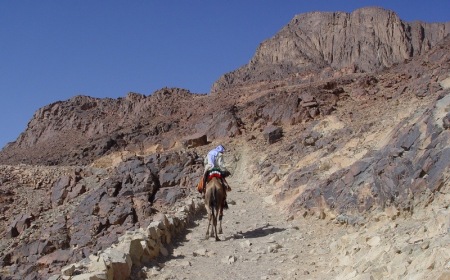