Dietary Restrictions in Leviticus: The Stork

In a previous post we looked at some dietary restrictions in Leviticus, observing that God’s purpose was to shape and mold a people (Israel) into His own special possession.

Leviticus 11 includes a list of birds that were unclean for food, including the stork:

In Eastern Turkey near Mt. Ararat we photographed this stork. 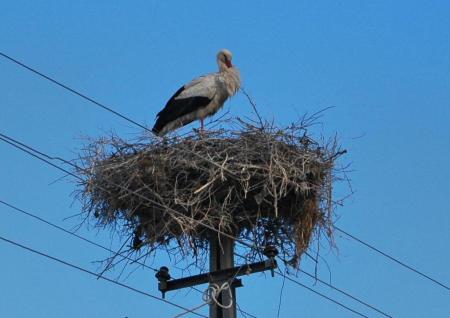 It is not uncommon for the stork to build its nest atop electrical poles.

The stork is mentioned in a few other biblical texts. The Lord sadly stated through the prophet Jeremiah,

Even the stork knows when it is time to move on. The turtledove, swallow, and crane recognize the normal times for their migration. But my people pay no attention to what I, the LORD, require of them (8:7, NET).

Migratory birds journey from Turkey to Africa taking the route of the “land bridge” of Israel. The Lord is saying that the birds (including the stork) obey Him, but His covenant people paid no attention.

This entry was posted on Wednesday, January 11th, 2012 at 10:23 PM and is filed under Bible History and Geography, Bible Study, Old Testament, Travel, Turkey. You can follow any responses to this entry through the RSS 2.0 feed. You can leave a response, or trackback from your own site.

2 Responses to Dietary Restrictions in Leviticus: The Stork