Cave of Machpelah, Tomb of the Patriarchs

This morning my wife and I safely arrived in Genk, Belgium, where I am to conduct a biblical lectureship focusing on Acts through Revelation. This is an opportunity to make use of photos of Bible lands in which the events of Scripture transpired as we survey this exciting portion of the New Testament.

This past March we were able to go to Hebron and take a few photos there, including the site of the Cave of Machpelah, featured in this photo: 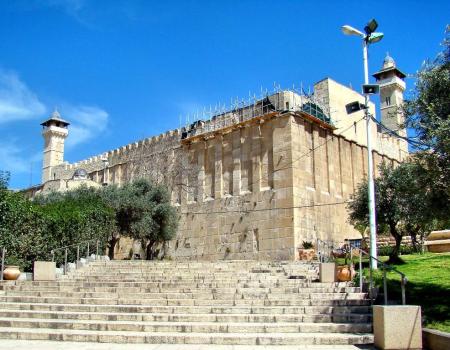 Site of Cave of Machpelah in Hebron. Photo by Leon Mauldin.

When Sarah died, the inspired narrator (Moses) tells us that “Abraham went in to mourn for Sarah and to weep for her” (Gen. 23:2). This was at Hebron. Abraham had to procure a burial place for his beloved wife. The Promise Land was to be possessed by his descendants, but Abraham owned no land in Canaan. Therefore he purchased the cave of Machpelah with its field from Ephron the Hittite. This transaction was duly made “before all who went in at the gate of his city” (Gen. 23:3-19).

“After this, Abraham buried Sarah his wife in the cave of the field at Machpelah facing Mamre (that is, Hebron) in the land of Canaan” (Gen. 23:19). Later, Abraham himself was buried here by his sons Isaac and Ishmael (Gen. 25:9). In Egypt, when Jacob was near death he called his twelve sons to hear his last words (Gen. 49:1). He commanded (ESV, Gen. 49:29) that he be buried at Machpelah also (v.30), and stated, “There they buried Abraham and his wife Sarah, there they buried Isaac and his wife Rebekah, and there I buried Leah” (v.31).

Herod the Great was a politician. To gain the favor of the Jews he lavishly renovated the temple in Jerusalem. Likewise, he built an impressive edifice around the cave of Machpelah, the tomb of the Patriarchs, using the same architectural style as that of Jerusalem’s Temple Mount, with similar sized stones, masonry and pilasters (engaged columns). In March we were able to visit Hebron and see the traditional burial site of the Patriarchs, featured in our photo.

Regarding these Patriarchs, centuries after their deaths, God said, “I am the God of Abraham, the God of Isaac, and the God of Jacob” (Matthew 22:31-32). Jesus said, “God is not the God of the dead, but of the living,”—these men, though dead and buried, were still very much alive, and God was/is still their God! The soul lives on after death; on the last day all will be raised from the dead (John 5:28-29; 1 Cor. 15:57).

This entry was posted on Tuesday, May 3rd, 2011 at 4:22 PM and is filed under Bible History and Geography, Bible Study, Machpelah, Old Testament. You can follow any responses to this entry through the RSS 2.0 feed. You can leave a response, or trackback from your own site.

6 Responses to Cave of Machpelah, Tomb of the Patriarchs