The Temple of Zeus in Athens is located southeast of the Acropolis. 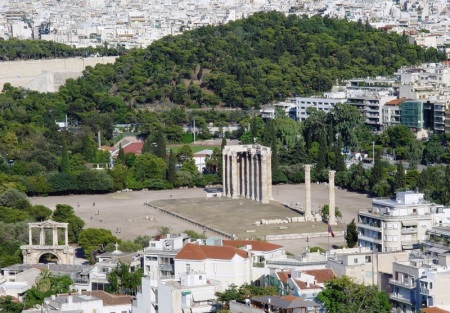 Temple of Zeus in Athens. Photo by Leon Mauldin

Wikipedia has the following general info:

The temple of Olympian Zeus . . . is a colossal ruined temple in the centre of the Greek capital Athens that was dedicated to Zeus, king of the Olympian gods. Construction began in the 6th century BC during the rule of the Athenian tyrants, who envisaged building the greatest temple in the ancient world, but it was not completed until the reign of the Roman Emperor Hadrian in the 2nd century AD some 638 years after the project had begun. During the Roman periods it was renowned as the largest temple in Greece and housed one of the largest cult statues in the ancient world.

Originally there were 104 Corinthian columns. Today 15 of those remain standing. A 16th column can be seen lying on the ground.

In the early 1800s a stylite made his dwelling on the top of one of the columns. The Greek word for column is stylos; the stylites were ascetics who spent long periods (sometimes years) on the tops of columns.

In the NT book of Acts, when Paul was preaching at Lystra, he healed a lame man. The pagan residents thought the gods had come down in human form. “They began to call Barnabas Zeus and Paul Hermes, because he was the chief speaker. The priest of the temple of Zeus, located just outside the city, brought bulls and garlands to the city gates; he and the crowds wanted to offer sacrifices to them” (Acts 14:12-13). Paul and Barnabas were just barely able to persuade them not to do so.

Right after that, Jews came from Pisidian Antioch, and persuaded those same residents of Lystra to stone Paul and drag him out of the city! (Acts 14:19).

This entry was posted on Tuesday, February 1st, 2011 at 8:59 PM and is filed under Athens, Bible History and Geography, Bible Study, Greece, Travel. You can follow any responses to this entry through the RSS 2.0 feed. You can leave a response, or trackback from your own site.

One Response to Temple of Zeus, Athens