In our previous post we made reference to Jacob’s watering Laban’s flock.  Genesis 28 tells of his flight from Canaan to Haran of Mesopotamia: “Now Jacob went out from Beersheba and went toward Haran” (v.10).  Jacob’s mother Rebekah had said, “Now therefore, my son, obey my voice: arise, flee to my brother Laban in Haran. And stay with him a few days, until your brother’s fury turns away” (Gen. 27:43-44).  Ironically, those “few days” would turn into a sojourn of some twenty years!

Previously we showed a photo of an ancient well to illustrate how Jacob watered the sheep as mentioned in Gen. 29:10. Our photo today was taken at Haran (modern spelling is Harran). Shepherds continue to lead their sheep to water and grazing these thousands of years later. 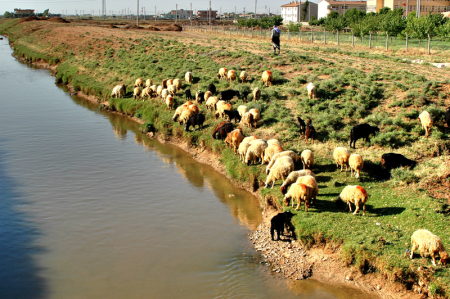 Jacob agreed to work seven years as a shepherd for Laban in order to marry Rachel.  When the time quickly passed the wedding night arrived. But the next morning Jacob awoke to discover that he was married to Leah, Rachel’s sister.  When he demanded an explanation from Laban, he told his immeasurably shocked son-in-law that it was not their custom to marry the younger daughters before the older.  But he had a solution: let Leah have her one-week wedding festivities, then marry Rachel, on the condition that you work seven more years!  Jacob agreed to those terms.  After those fourteen (total) years had passed, Jacob worked another six years for Laban, making the total of twenty years we referenced above in our post.

Photo below shows the site of biblical Haran. 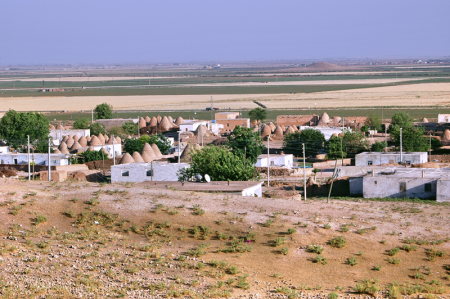 Later, when Isaac died, Jacob and Esau buried him.  But there is no mention of all of Jacob’s seeing his mother after sending him away to Haran for what she thought would be just a short while.

This entry was posted on Tuesday, November 9th, 2010 at 8:12 PM and is filed under Bible History and Geography, Bible Study, Travel. You can follow any responses to this entry through the RSS 2.0 feed. You can leave a response, or trackback from your own site.