The concept of recycling is ancient; when visiting biblical sites it is common to see evidence of secondary usage of materials.  In our photo below, Fatih Cimok explains that this marble object is made of  “reused material from the Byzantine shops situated next to the synagogue in Sardis.”  This is believed to have been a baptistry. 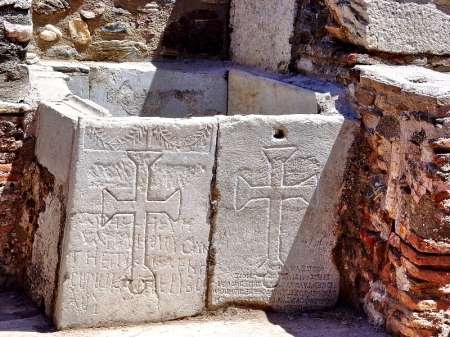 Cimok goes on to say, “The crosses were superimposed over pagan inscriptions and decorations” (A Guide to the Seven Churches, p.76).

Sardis also had an impressive gymnasium and bath complex that comprised about five acres.

The open courtyard in front was for exercise; the bathhouse was directly behind the gymnasium. This complex is dated as 2nd century A.D.

Another interesting topic while we are featuring Sardis is the matter of its wool-dyeing. In his Pictorial Library of Bible Lands, Todd Bolen writes,

Sardis was known for the invention of wool-dyeing.  Even today sheep are a commonplace appearance at the ruins of Sardis, a city once known for its luxury textile and clothing trade.  John’s reference to soiled garments and the white raiments of Christ in Revelation 3:4 would have been significant to the church at Sardis in light of the city’s trade: “Thou hast a few names even in Sardis which have not defiled their garments; and they shall walk with me in white: for they are worthy” (KJV).

Our photo below, taken in March 2010, shows sheep grazing at Sardis, a view essentially unchanged over thousands of years.

A frequent question that arises is, “What are the people like over there?” For the most part, people are quite friendly.  When our group was at Sardis there was apparently a school outing that was taking place there.  Some of the students wanted me to take their photo.

This entry was posted on Wednesday, June 9th, 2010 at 10:10 AM and is filed under Archaeology, Bible History and Geography, Bible Study. You can follow any responses to this entry through the RSS 2.0 feed. You can leave a response, or trackback from your own site.