In Rev. 2 we have the letter to the church at Smyrna (modern Izmir).  This church received the shortest of the seven letters (Rev. 2:8-11), and it consists only of commendations.  Smyrna was one of the wealthiest cities of the Roman province of Asia, but the Christians there were poor; Jesus wrote, “I know your works, tribulation, and poverty (but you are rich)” (Rev. 2:9).   Their poverty may have been in large measure due to their unwillingness to compromise their convictions.  Christians who were exclusively loyal to Jesus Christ could not worship other gods, nor could they take part in emperor worship.  It may be difficult for us to imagine how pervasive idolatry was in the first century.  When the New Testament church came into existence, the residents of Smyrna had for centuries been worshiping the goddess Athena.  The ruins of her temple are pictured here:

The goddess Athena was in fact widely worshiped. Her image below is in the Izmir Museum: 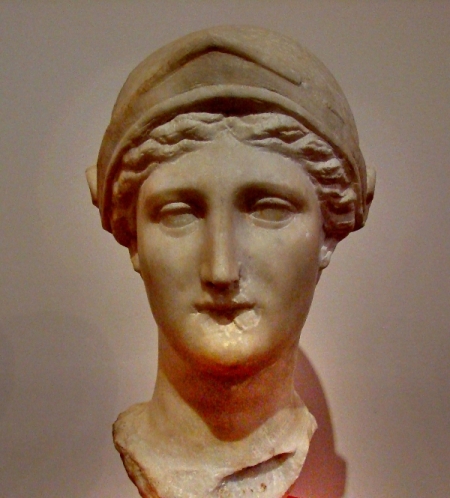 Imperial worship was deeply entrenched at Smyrna, the practice of burning incense to Caesar and saying that “Caesar is Lord.”   Here is an image of one of the priests of the Imperial Cult, representative of the men who served in such temples and expedited emperor worship.

Those who made up the church at Smyrna were told, “Be faithful until death, and I will give you the crown of life” (Rev. 2:10). We learn that the faith that pleases God is based not on convenience, but on deep and abiding conviction.  What Jesus required in the 1st century He requires in the 21st century.

This entry was posted on Tuesday, April 27th, 2010 at 11:09 PM and is filed under Bible History and Geography, Bible Study. You can follow any responses to this entry through the RSS 2.0 feed. You can leave a response, or trackback from your own site.

One Response to Smyrna, the Poor, Rich Church