Many of our recent posts have featured biblically related artifacts which are housed in Istanbul’s Archaeology Museum.

As you enter the main entrance of the museum, you are “greeted” by a 3.5 meter statue of the Egyptian god Bes, depicted as holding a lion by its hind legs. 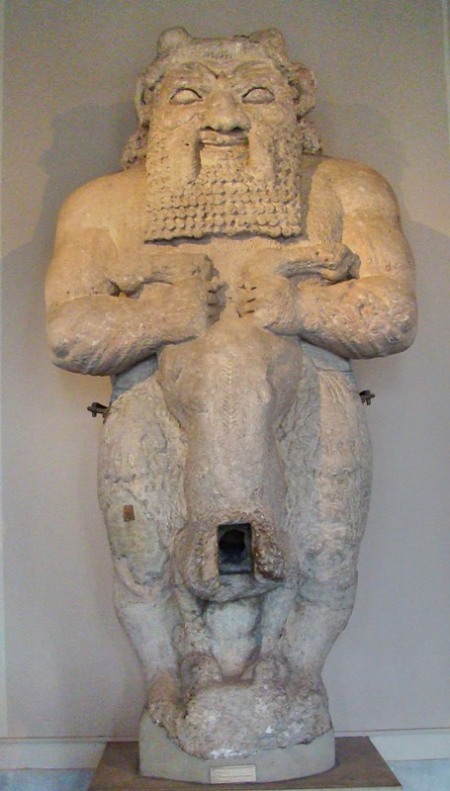 It was believed that Bes protected the individual from evil. BAR editor Hershal Shanks writes, “An Egyptian god adopted into the Canaanite-Phoenician pantheon, Bes served as the ordinary person’s chief talisman against evil. He had already assumed a prominent role by the ninth century B.C.” (15:04 July/August 1989).  It was especially thought that Bes was the protector of pregnant women.

The Biblical World in Pictures notes, “Bes was a household Egyptian deity responsible for the welfare of pregnant women, happiness in the home and prevention of disease. Like many other Egyptian motifs, he was adopted in the Levant, especially in Phoenicia.”

travellinkturkey.com states that the statue of Bes in the Istanbul Archaeology Museum was brought from the island of Cyprus.

Belief in a god such as Bes was only the proverbial “drop in a bucket” of the pervasive idolatry of the ancient world.  In giving the Ten Commandments God called His people to leave all forms of idolatry and be devoted exclusively to Him:

The world of the 1st century in which the church was established was permeated by idolatry.  The call of the Gospel is summarized by Paul in 2 Cor. 6:16-2 Cor 7:1:

And what agreement has the temple of God with idols? For you are the temple of the living God. As God has said: “I will dwell in them And walk among them. I will be their God, And they shall be My people.” Therefore “Come out from among them And be separate, says the Lord. Do not touch what is unclean, And I will receive you.” “I will be a Father to you, And you shall be My sons and daughters, Says the LORD Almighty.” Therefore, having these promises, beloved, let us cleanse ourselves from all filthiness of the flesh and spirit, perfecting holiness in the fear of God.

This entry was posted on Monday, April 5th, 2010 at 4:26 PM and is filed under Archaeology, Bible History and Geography, Bible Places, Bible Study. You can follow any responses to this entry through the RSS 2.0 feed. You can leave a response, or trackback from your own site.

3 Responses to The Egyptian god Bes